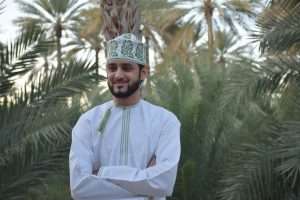 I have encountered human kindness in every part of the world; yet, the hospitality and generosity that flow out of the Omani heart are unsurpassable, for they run deeply into the essence that defines the character of the whole nation and do not represent just a few individual cases.

Every visitor to Oman has a list of stories to share, all enchanting and benevolent, sometimes difficult to believe. I remember that every time we were planning with friends a trip to the neighboring country while I was living in the UAE, we would stock up on dates, cookies, and nuts to offer as a thank-you gift for some act of hospitality we were confident we would soon encounter. Below are some of my personal experiences, which they pale when compared to the numerous impromptu invitations fellow hikers or campers have received to weddings, feasts, or even homes, just because their paths intersected with those of the locals. 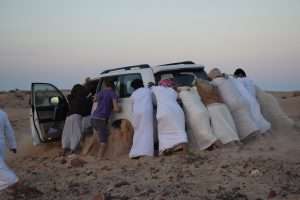 We were on a road trip along the coastline of Oman, somewhere close to Qihayd. The sun was about to set, and we were getting anxious to find a suitable spot to set our camp for the night. In an (amateur) attempt to explore a location that, from afar, looked promising, one of the drivers of our group took his car onto territory that was clearly unmarked by any other wheel traces and, as expected, he got stuck quickly and irrevocably into the sand. We were quite hopeless as we did not have any rope to pull the car out, and the fast-setting sun at the horizon was an ominous premonition for our night prospects. Despite the late hour, an Omani man happened to drive by and, following the unwritten law of the desert, he stopped to help. He called immediately friends and relatives who soon arrived from all directions. Some went in search for a suitable rope; others rolled up their sleeves and started pushing the car out of its predicament. There was a lot of coordinating shouting and even more laughter, adrenaline was up, and the sand cast from the spinning wheels showered us ferociously. With so many hands, the car was soon on the solid ground, and when the ropes arrived, they were not needed anymore. Tokens of appreciation were barely accepted while taking photos with us and telling jokes seemed to be more interesting and intriguing.

We were scouting the beaches on the west side of Masirah island when a small boat arrived, and a couple of fishers jumped on shore. We approached them thinking that maybe we could buy something for our camping dinner and we ended up with a huge fish (much bigger than what we needed), for which the locals refused to take any money! Cutting off the head or cleaning the intestines so that we could safely store the fish in ice proved to be an adventure on its own since our small knives were rather inadequate for the task. We grilled our gift that night, adding baby corn, boiled potatoes, and tomato salad to the menu, still fascinated by the generosity of the locals who preferred to treat us as friends rather than potential clients.

Impromptu guiding tour in the old town of Adam

It was mid-day when we arrived in the modern part of Adam town, searching for Harrat al Jamii and the remnants of the old adobes. The streets were empty but for two young Omanis whom we stopped to ask for directions. Immediately, they volunteered to guide us, spending with us the rest of the afternoon among the ruins of the old mud houses, treading through the palm trees’ orchards, climbing on watchtowers, and demonstrating the operation of the sundials (vertical poles and lines on the ground demarcating time intervals defined by the movement of the shadow of the tip of the pole in order to regulate the irrigation system and use of water among the various owners and fields). In the end, they brought coffee pots and a bowl of dates from their house and insisted on us spending the night there, as they would organize a BBQ feast in honour of our visit. It took us a lot of effort to politely reject the dinner invitation as we feared that we were too many to “take advantage” of their hospitality. We continued our way, still feeling that Adam had evolved from a mere tourist destination into our “home” over the past few hours. 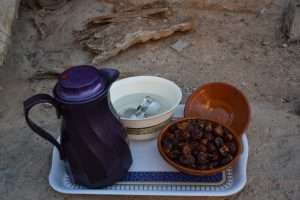 It is a long story how I ended up in Muscat alone, without a car, trying to find an easy (and inexpensive) way to get back to Dubai, but there I was. My best option was to take the bus from the central station which, according to my map, was close to the hotel I was staying. The directions seemed simple but, as soon as I exited the hotel, I realized they were not as clear, especially since I was carrying my luggage which made possible mistakes and diversions challenging and unwelcome. I spotted a taxi and approached, thinking that the driver would surely be able to guide me. The middle-aged Omani man looked at me and shook his head emphatically trying to retrieve all the English words in his vocabulary to assist me. Unfortunately, his English proved to be rather poor, and no explanation was clear. “Come in,” he said, “I will take you.” I was quite embarrassed to admit that I had run out of Omani rials, and I had only my credit card and a 1000-dirham note from which it would be impossible for him to give me any change. “Never mind,” he insisted, “I will take you.” Although the drive was short as the station was indeed very close, this driver’s generosity helped me catch my bus on time, and, to this day, the memory fills me with gratitude. 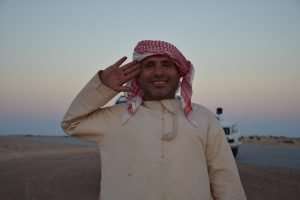 My trips to Oman have turned me into a person richer at heart. The people I met on the way reminded me that life is about giving, especially when you have nothing. Abundance cannot be conventionally measured; it can only be experienced and shared. These are the moments we finally manage to evolve into the universal tribe we were always supposed to be: the moments our individual needs surrender to the bigger entity which we are meant to serve, cherish, and protect. And only then, can we feel proud to call ourselves “human.” 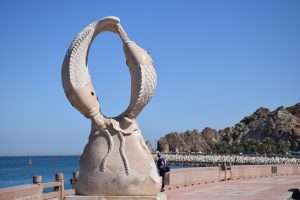 This article was first posted on the blog of Konstantina, www.MyUnusualJourneys.com.