The Hospitality of the Berber Women in a Moroccan Village

The sun was about to set when we arrived at Tizi Oussem, a capital Berber village perched on the slopes of the Atlas Mountains (at around 2,200 m altitude), not very far away from Marrakesh. Despite its size, it is a rather primitive settlement. The streets are mere footpaths eroded by the elements, and most of the abodes are thick-walled, clay buildings, typical examples of the rural African architecture. Yet, Tizi Oussem is well-located on the hiking trail towards Mt Toubkal, so, over the years, it has turned into a popular sojourn spot for the numerous hikers who wish to explore the Moroccan mountain range.

After a full-day trek, we were glad to take off our boots and enjoy hot tea, biscuits, and popcorn at the veranda of our lodge, overlooking the valley. The last golden hues of the setting sun softened the rugged landscape, and the harsh edges of mountains and buildings mellowed as the night approached. The serenity of the evening was temporarily interrupted by the hoarse voice of a muezzin who invited the faithful to pray, the familiar verses sounding much more strident than the melodious invitation we are used to hearing in the Gulf. Despite its roughness, though, the sound seemed in harmony with the surroundings, and as the verses echoed in the valley, they carried all the emotional fragility with which our human race reaches out to the Divine. 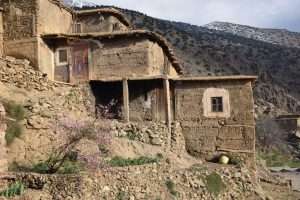 We still had some time before dinner, so I followed my friend, Aziza, who was keen to explore the village and, hopefully, connect with the locals. With her headscarf, Islamic background, and Arabic knowledge, she proved to be much more welcome inside the Berber houses than what I would have been if I were on my own. Like all mountain tribes, the inhabitants of Tizi Oussem are very conservative, and the women refrain from interacting much with the foreigners that flood their village. Still, Aziza’s politeness and constant efforts to break the language barrier and combine a few Arabic words with many gestures soon swept away any hesitation, and we were lucky to be invited inside a few houses, getting a taste of the local hospitality.

We first met Lala Fatma, the wife of the mullah, as she was tidying up her yard, getting her animals ready for the night. She opened the doors to her house, which was tiny and dark, lit only with a couple of lamps, and received us with a timid smile. She had already prepared Moroccan tea with aromatic zaatar (thyme), and we shared a glass, surrounded by her chicken who resided on the upper floor. We then moved to the ground floor, where Lala Fatma showed us the guest room (filled with piles of blankets), and, ultimately, as a sign of great trust and hospitality, her own bedroom: another tiny chamber, cramped with the bed, the covers, and a small TV, and, yet, cosy and friendly, emanating some of the warmth of its owner.

We continued our stroll in the village, befriending another Berber woman who also invited us in the sitting room of her house, where three children, a girl and two boys, were watching a Turkish serial on the TV. They were all very shy, barely smiling, casting glances to us now and then, while pretending to continue being engrossed with the story unfolding on the screen. We were offered coffee with hot milk and a plate with local bread and olive oil, the whole gesture warming our hearts, for, unlike the merchants in Marrakesh and the other metropolitan centres of Morocco, these people were authentic, and their hospitality was genuine as they did not expect anything in return. Our discussions were unfortunately limited since the local dialect is too different from the Khaleeji Arabic, and, given their shyness, we do not have any photos to commemorate the encounters. Yet, that evening remains one of my best memories from Morocco and a reminder that when our connections, no matter how small and trivial, start from the heart, they are always meaningful and essential.

This article was first published on the Patreon page https://www.patreon.com/KonstantinaSakellariou of Rahhalah's Advisor for Europe, Konstantina Sakellariou.