South Korea is known for its bustling, high-tech metropolitan areas as well as its subtropical islands and green countryside, dotted with cherry trees, centuries-old Buddhist temples, and coastal fishing villages.

With this itinerary, we offer you the opportunity to discover the diverse faces of the country, getting a glimpse of both cosmopolitan Seoul and the stunning landscapes of Jeju Island. Prepare to walk on ancient paths, sipping the renowned green tea of the Orient, while uncovering the secrets of a 5000-years-old civilization. The Koreans themselves, known for their friendly disposition, creativity, and tenacity, will amaze you and will turn this trip into an unforgettable experience.

Upon your arrival at the airport, you will be welcomed by a Rahhalah representative, and you will be transferred to your hotel.

Note:One group airport transfer is included in the price. Additional transports can be arranged at extra cost.

Enjoy the rest of the day at your own pace. In the evening, the group will reassemble for a Welcome Dinner.

Today,after breakfast, you will embark on a walking city tour around Seoul, visiting some of its most notable highlights.

Blue House
Cheongwadae, also known as the Blue House, is the Korean Presidential residence, located in central Seoul. The presidential office, reception hall, and conference room can all be found in the main building, while the broader grounds include a pond and gardens that reach to the foot of the Bugaksan Mountain. The site is so popular that reservations must be made well in advance, sometimes as early as six months before the visit and no later than 20 days before the desired date.

Gyeongbokgung Palace
Built in 1395, Gyeongbokgung Palace is also known as the Northern Palace, as opposed to the neighboring Changdeokgung (Eastern Palace) and Gyeonghuigung (Western Palace).
Gyeongbokgung Palace is arguably the most beautiful and the largest of all. The premises were once destroyed by fire during the Imjin War (Japanese Invasions, 1592-1598). However, all buildings were later restored under the leadership of Heungseondaewongun during the reign of King Gojong (1852-1919).The Gyeonghoeru Pavilion and the Hyangwonjeong Pond(the most representative edifices of the Joseon Dynasty) have remained relatively intact. Woldae and the sculptures of Geunjeongjeon (The Royal Audience Chamber) represent past sculptures of contemporary art.

Insa-dong
Insa-dong is a district in the heart of the city where old but precious and traditional goods are on display. It consists of one main road with alleys on each side. Within these alleys, there are galleries, traditional restaurants, teahouses, and cafes.
The galleries are the heartbeat of Insa-dong. There are about 100 of them in the area, offering to the visitor the opportunity to admire various examples of traditional Korean art, from paintings to sculptures. The most famous galleries are the Hakgojae Gallery, which functions as the center of folk art;the Gana Art Gallery, which promotes many promising artists; and theGana Art Center.
Many teahouses and restaurants complement perfectly the artistic ambience of the district. Spend time strolling through the winding alleys, enjoying some window-shopping along the way, and discovering the hidden gems of the neighborhood.

N Seoul tower
The Namsan Seoul Tower was the first tower-type touristic spot in Korea. Its peak is almost 480 meters above sea level, including the height of the Namsan Mountain (243m) on which it stands, and the tower’s height (236.7m) as well. This makes it one of the tallest towers in Asia. The complex includes the Seoul Tower Plaza, which only recently opened to the public, and the N Seoul Tower, which is operated by CJ Foodville since 2005. The edifice was first established as broadcasting (TV and radio) tower in 1969. Today, it has become one of the most well-known landmarks and multi-cultural venues of Seoul.

Myeong-Dong
Myeong-dong is one of the most prominent shopping districts in Seoul, mostly for clothes, shoes, and accessories. Unlike other markets like Namdaemun or Dongdaemun, many designer brands are sold in Myeong-dong. Also, several major department stores have branches here, including Lotte Department Store, Shinsegae, Myeong-dong Migliore, Noon Square, and M Plaza. The department stores carry many premium labels and other fashionable goods at reasonable prices

After breakfast and before you head to Jeju, there is still some city exploration to do, as Seoul boasts additional points of interest worth a visit.

You will start by exploring the COEX underground mall, which reopened at the end of 2014 after the completion of large-scale renovations, led by the world-renowned architectural firm “Gensler”. Under the broader concept called "The Unfolding Sky," the mall includes five uniquelythemed squares, all designed to receive optimal amounts of natural light and traffic flow. It is a shopping mecca for global brands related to fashion, accessories, cosmetics, lifestyle, and more, while there are also many restaurants and a large movie theater complex.

Next, you will visit the Starfield Library, which represents an excellent spot for photos. Located in the middle of the COEX Central Plaza, the Library offers visitors a perfect reading space, with more than 50,000 books and over 400 magazine titles.

Finally, you will stop at the Seoul Forest. In the past, the forest was a royal hunting ground and served as a military inspection facility as well. However, over the past decades, Ttukseom served as a water-treatment facility, a golf course, a horse racing track, and eventually a sports estate.It consists of five parks spread over 595,000 m2 of land: an eco-friendly zone that is rapidly developing into the premium city-park of Korea like Hyde Park in London and Central Park in New York.

In the afternoon, you will head to Gimpo airport and board the domestic flight toJejuIsland (flight duration: 1 hour).

Upon your arrival, you will be welcomed by your local guide, and you will be transferred to the hotel. Enjoy the rest of the day at leisure.

After the shopping frenzy and the modern ambience of Seoul, prepare to reconnect with nature, engaging in a series of exciting activities. As such, after breakfast, you will enjoy a leisurely horse-riding tour (30 mins), and a brief hike along the Yongnuni Oreum Trek (around 30min).

​​​​​​​Later, you will visit SeongsanIlchulbong–also known as the “Sunrise Cliff”– where you will hike (1 hour) to the peak (180m altitude). Seongsan Ilchulbongis an archetypal tuff cone resembling a gigantic ancient castle and wasformed by hydrovolcanic eruptions upon a shallow seabed about 5,000 years ago. It has a preserved bowl-like crater and displays diverse inner structures resulting from the sea cliff. Its overall geological value makes it a rare natural monument in the area and, as such, it has been recognized as a UNESCO World Natural Heritage Site, regarded as one of the most scenic destinations in Korea.

You will continue byexploringthe Manjang Cave. Manjang Gul is part of the longest lava tube system in the world, measuring 13,422 m in length. The main cave,Manjang(8,928m), the Kimnyeong Snake Cave (705m), and three lesser-known caves Jwolgul, Batgul and Gaewusaegul (3,738m) are all part of this single cave system. This mysterious lava tuberanges from 2 to 30m in height and 2 to 23m in width.

You will also visit the Jeongbang Falls (23 m high): one of the island’s most famous falls, along with Cheonjiyeon and Cheonjeyeon. It is the only cataract in Korea where the water lands directly into the sea.Moreover, the cliffs and surrounding old pine trees create a picturesque landscape, chosen as one of the Ten Scenic Sights of Yeongju with the name “Jeongbanghapok.” It is said that the words ‘Seobulgwacha’ are engraved on the cliffs of the Jeongbang Falls.

You will finish the day by visiting the Jusangjeolli Cliff: a spectacular volcanic rock formation next to the sea, with spectacular views and the thundering sound of the waves that crash on the cliffs. The place is becoming an increasingly populartourist destination, as visitors enjoy walking along the precipice, marveling at the force of nature.

Today you will hike on the Yoengsil Trail, the shortest one on Mt. Hallasan, but also the safest for beginners and, thus, the most popular among visitors. Although you will not reach the summit, you will enjoy breathtaking views on the way.

Afterwards, you will visit theO’sulloc Green Tea Museum,where you will learn details about the traditional tea culture of Korea and itsfamousgreen tea.

O’sulloc opened in 2001 and is located at the entrance of the Seogwang Tea Garden. The building itself looks like a green teacup, and it is a place of culture, where tradition blends with the modern era and the East meets the West.

After breakfast,enjoy your last hours in Jeju, before checking out from the hotel and heading to the airport for your flight back to Seoul (duration of flight: 1 hour).

Upon arrival, you will be transferred to the hotel to enjoy the rest of the day at your leisure before the group re-assembles for the farewell dinner.

After breakfast, you will be transferred to the airport for your flight back home.

Note: One group airport transfer is included in the price. Additional transports can be arranged at an extra cost. 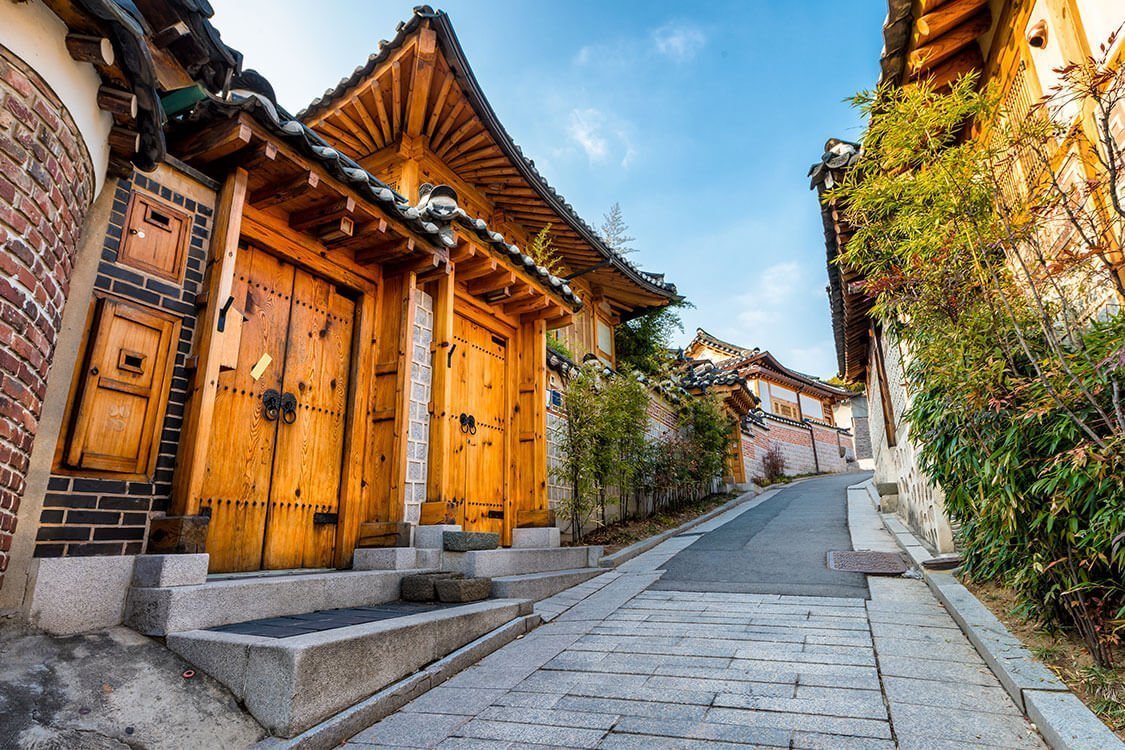